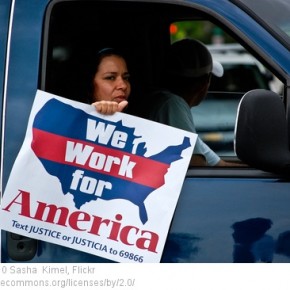 Immigration reform is the GOP’s 1996 welfare reform. Just as Bill Clinton pulled the Democrats toward the center, the Republicans’ recognition that the electorate has changed, becoming much more tolerant and diverse, has compelled many of them to go into reverse. If they’re going to rebuild the Republican party, they cannot afford to let the Obama administration identify this policy with the Democrats alone, and turn theLatino vote into a Democratic vote.

Worse, on Monday, when the Supreme Courtheard the case on Arizona’s Proposition 200, adding extra citizenship requirements for voter registration that singled out Latinos, the Obama administration took the position that immigration is a national issue, not a state issue. Proposition 200 is the Arizona Taxpayer and Citizen and Protection Act, and this means it’s not just a national issue, but an “us against them” piece of legislation. Many voters in the electorate at large are watching, and they see this state as being punitive.  This only increases the pressure on the GOP to get behind reform.

By turning immigration reform into a national issue, the Obama administration hopes to help the Democrats walk away with the most popular support. What is more, Obama followed his usual leadership M.O. of bringing everyone to the table — the bipartisan Gang of Eight. Obama has cleverly positioned the debate so that the GOP and Congress will be faulted for failing to resolve immigration reform, thus leaving himself room for more reform efforts, including airing his position in the national venue of the Supreme Court.