Hillary, Barack, & Eleanor (What Wave of Feminism is Clinton Riding?)

Posted on by Ruth O’Brien 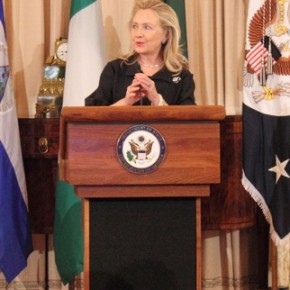 Is Roosevelt’s Rule Akin to Barack’s A More Perfect Union?

While naming everything after Roosevelt has many upsides, it could give the American public more clarity about Hillary’s position on the private and public rights and privileges of women and girls in the United States.  What feminist wave is Hillary riding?  A CNN blogger referred to Hillary’s statement that

“One of the best pieces of advice I’ve ever heard is from Eleanor Roosevelt in the 1920s who said that women in politics or public roles should grow skin like a rhinoceros,” Clinton said. “I think there’s some truth to that.”

Remember that Barack Obama had to clarify his position on race before winning the Democratic nomination in 2008.

This so-called Roosevelt Rule does more than articulate Hillary’s position on women’s and girls’ rights or her version of feminism.  It also puts some distance between Eleanor and her uncle, President Theodore Roosevelt (who shot a few rhinos in his day).  It puts even more distance between Eleanor and her supposedly philandering husband, Franklin D. Roosevelt, which explains her move to a different residence (essentially across the street) in Hyde Park, New York, while FDR served as President of the United States.