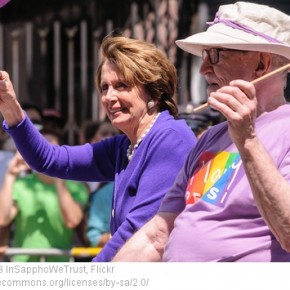 While I was torn about not getting to vote for Cory (Booker) in our special Senate election called by Chris (Christie), I am so thrilled to be voting in NYC at last — knowing I don’t have to vote for Eliot, and I don’t have to vote for Anthony.  I can cast a vote for another first with Christine (Quinn), our first openly lesbian mayor, I hope.  And finally, I can rest easy knowing that Hillary too is from my new home state.

Yet it was the former (first female) Speaker of the House, Nancy Pelosi, who described her fellow Democrat Anthony Weiner’s behavior best — as  “reprehensible; it’s so disrespectful of women,” reminding us that the war on women is not always waged by one side of partisan divide.  Also people should stop picking on Huma (a former Hillary Clinton aide).

But since Republican and Democratic men seem to have various “boundary” issues, addictions, and sexual tics that they try to describe as “inappropriate” — an explanation few women could believe, since sexual harassment and unreciprocated sexting are more akin to non-consensual groping and rape than sex (i.e. about power and humiliation) — I hope I won’t be taken to task as a neo-Victorian moralistic voter if I let the war on women influence my first NYC election.  Power is power.