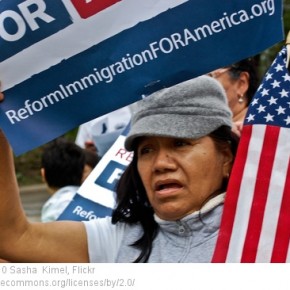 Ignoring the Roberts Court, ignoring Putin and the whole PRISM scandal (Snowden leaking NSA civil-liberties violations and then rushing off to Russia), Obama held his own immigration-reform roundtable with business leaders.

What did he hone in on? Practicing social-media etiquette, Obama liked (and refrained from overtly disliking) what the Senate has devised as he put a spotlight on the “shadow” economy. He juxtaposed the above-board economy to the below-board economy, emphasizing how the low economies “oftentimes exploited at lower wages, and that hurts those companies that are following the rules, because they end up being at a disadvantage to some of these less scrupulous companies.”

Was anyone listening? It’s doubtful. The few reporters who cover the national news were all assigned to cover what happened across the street from Congress (the Supreme Court decisions).

It’s not just timing that’s everything in politics; and it’s not just the attention span of listeners that accounts for less-than-“deliberative” democracy — the public lacks information, as reporters (being as scarce as paper) all do what I call swarm-and-spin reporting. And naturally, those who benefit most from the lack of information — special interests or the lobbying industry that spans both sides of the aisle in Congress — do not like any spotlight. And Obama himself should stop defending secrecy and PRISM, since it will casts a large dark shadow over his presidential legacy. As Jill Lepore put it well, “the case for privacy comes too late. . . .Your photograph is already on Facebook. Google knows that, notwithstanding your demographic, you hate kale.”